Fettes College Guangzhou (FCG) aims to be China's leading example of the best of Chinese and Western education, drawing on 150 years of boarding education excellence at Fettes College in Edinburgh, UK and to produce broadly educated young men and women with the abilities and self-confidence to make a significant contribution to the global society.

In Chinese culture, the mountain is a symbol of obstruction, also it represents a kind of moral character. According to the Book of Changes, which is thought to be the oldest and most abstruse classic in Chinese history, the image of mountains means that to stop when it should stop and to go when it should. It contains upward power representing the combination of dynamic and static, seizing the opportunity, overcoming obstacles, and having a bright future. Zhu Xi, the most outstanding Chinese philosopher of Neo-Confucianism once said: "Benevolent people are like mountains. They are willing to reason and they are quiet. From then on, the quiet and steady characteristics of mountain and the steady and resolute quality of benevolent people began to be deeply rooted in the hearts of Chinese people.

Fettes College Guangzhou is situated in a picturesque area surrounded by green hills. The GRIT programme developed by the Middle School originated from the idea of integrating geographical and cultural features into a project which demands physical effort and spiritual perseverance. The purpose is to provide students a chance to challenge themselves, explore culture, practise teamwork, and also strengthen family ties. Then, GRIT has evolved into a branch of in-school curriculum with carefully planned objectives, learning process and multi-dimensional assessments. This year, GRIT programme began with climbing 9,999 steps up to the top of Baishuizhai Mountain, also named as “The tallest stairway in South China”.  We also expect higher mountains and more challenges ahead in the future. 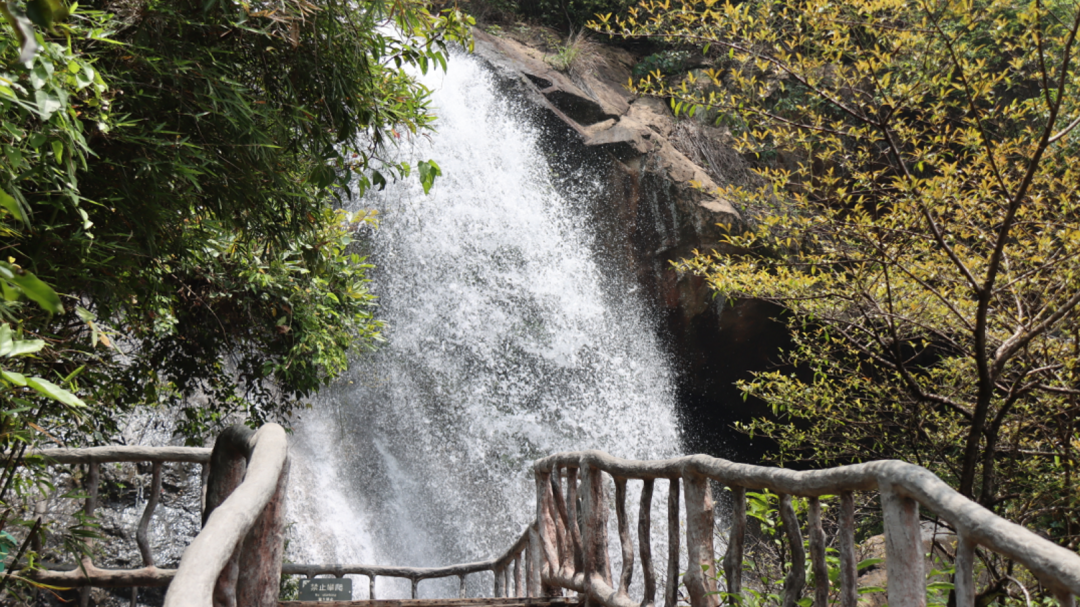 Located in Paitan town in the mountainous northern region of Zengcheng district, the Baishuizhai Scenic Spot consists of several mountains. The main one is Baishuizhai Mountain at a height of 828 meters.

The Baishuizhai Waterfall, with a drop of 428.5 meters, flows down from the Baishuizhai Mountain like a giant white ribbon. The scenic spot consists of several routes for visitors to enjoy their time at Baishuizhai. They can choose to climb the "foremost ladder in South China"—a hiking trail with 9,999 steps – or take a sight-seeing bus.

Grit is proposed by Angela Lee Duckworth, an Asian American psychologist and associate professor at the University of Pennsylvania. It refers to persistent enthusiasm and persistence for long-term goals. According to Duckworth-Lee's research, grit is the most critical factor for a person's success, which is more influential than IQ, test scores, family income, and other factors.

Through the careful design of written curriculum, taught curriculum and assessed curriculum, our middle school pupils are expected to complete not only the physical and endurance challenges of mountaineering, but also gain knowledge of local cultural and comprehensively improve their perseverance, resilience, self-confidence and leadership.

On May 8, all the teachers and students of Fettes College Guangzhou Middle School set out to Baishui Village to take the challenge of climbing the 9,999 steps. This is a programme that requires enthusiasm and tenacity as well as courage and perseverance. To prepare this programme from the aspects of psychology, physical fitness, academics, teachers of Fettes College Guangzhou spent more than a month deliberately designing an interdisciplinary project. 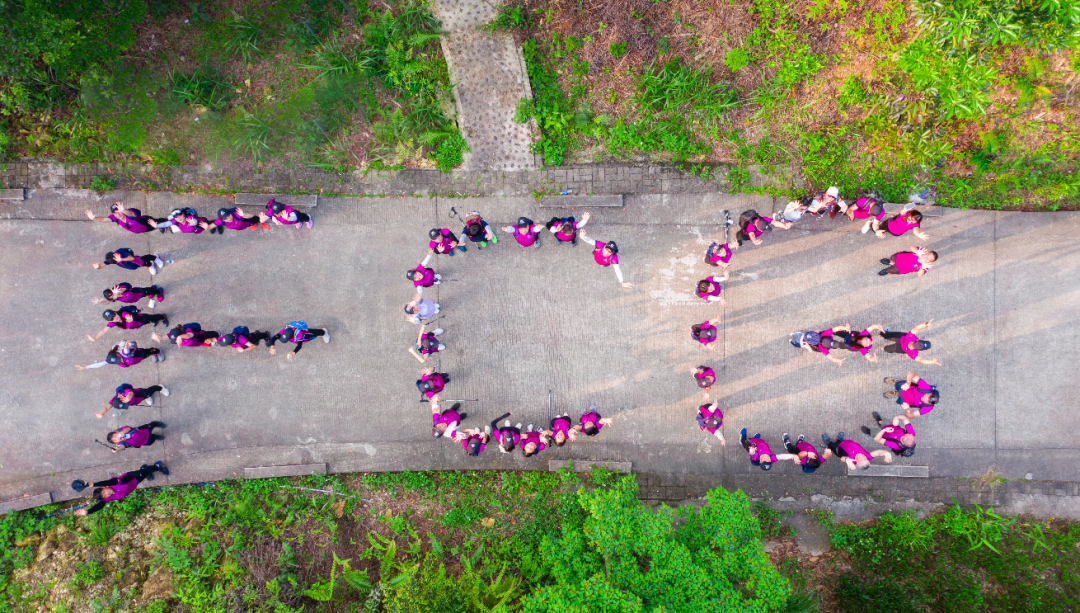 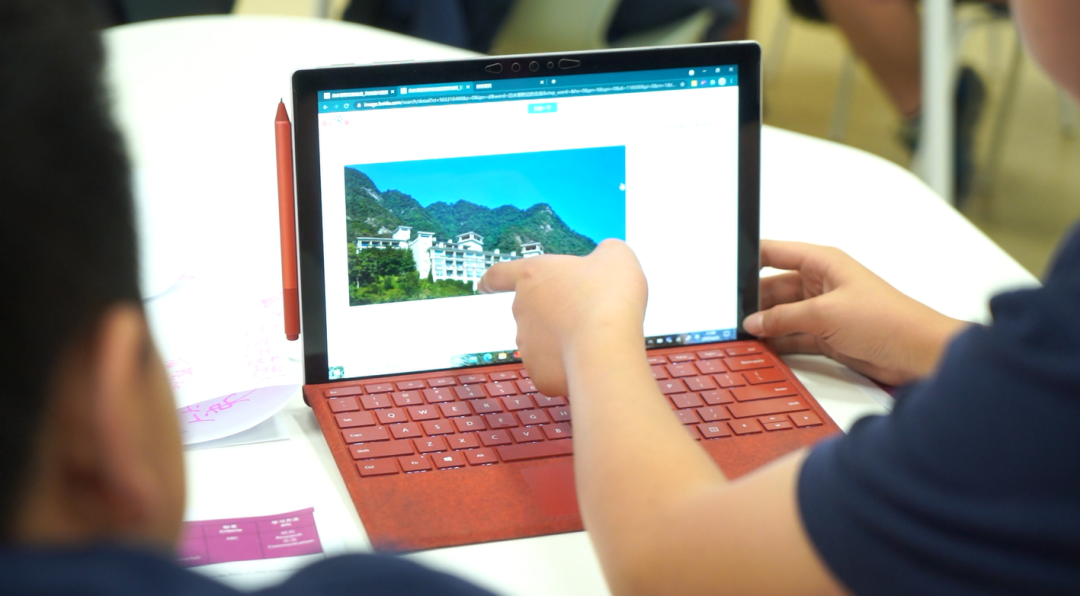 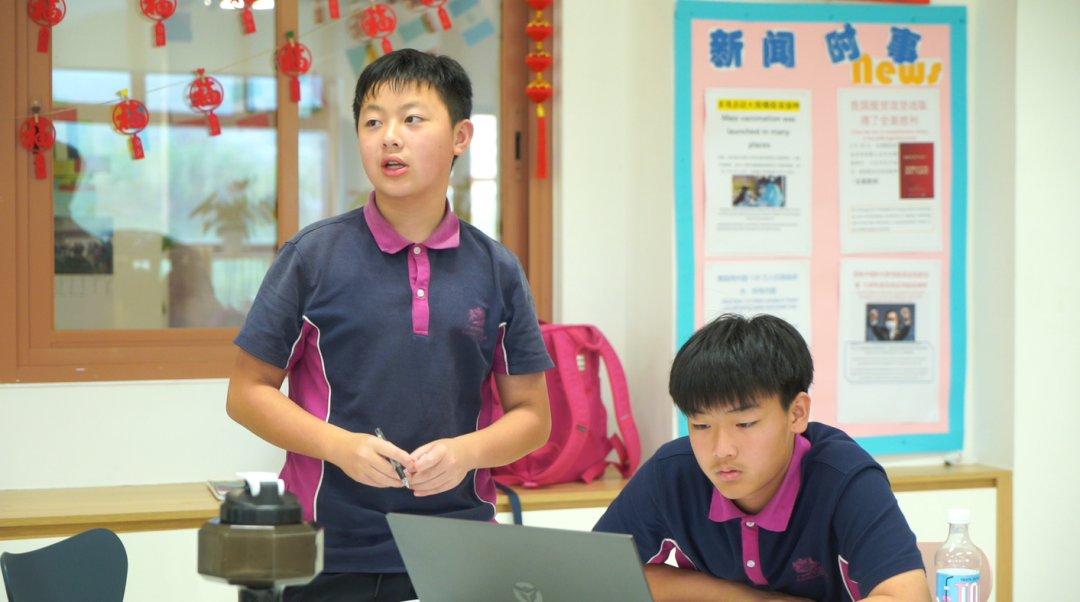 An academic team was set up to compile interdisciplinary learning materials, so that students could explore Baishui village and its surrounding areas in advance. 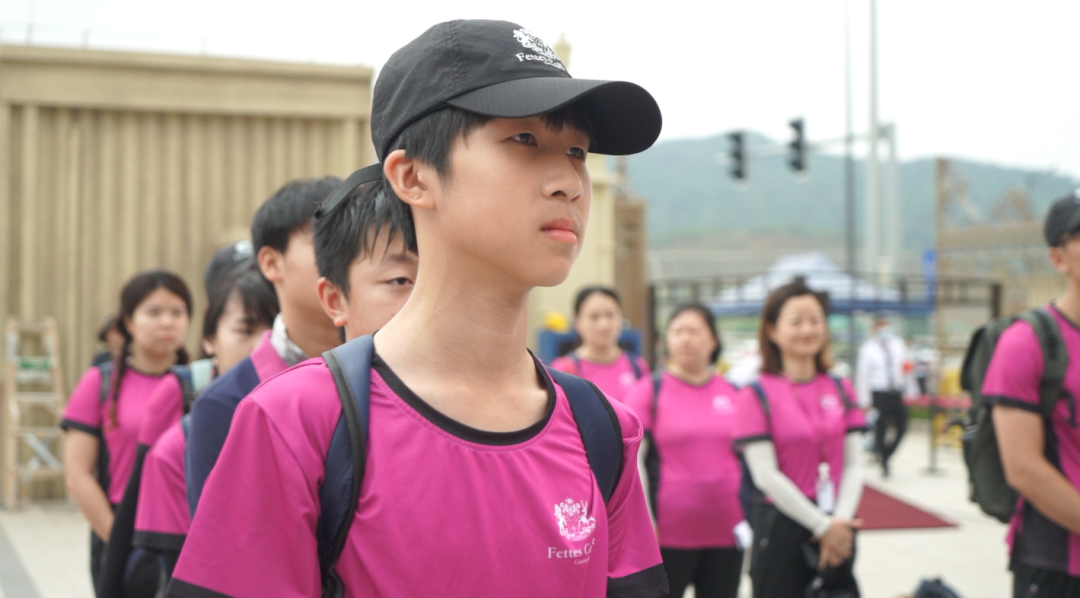 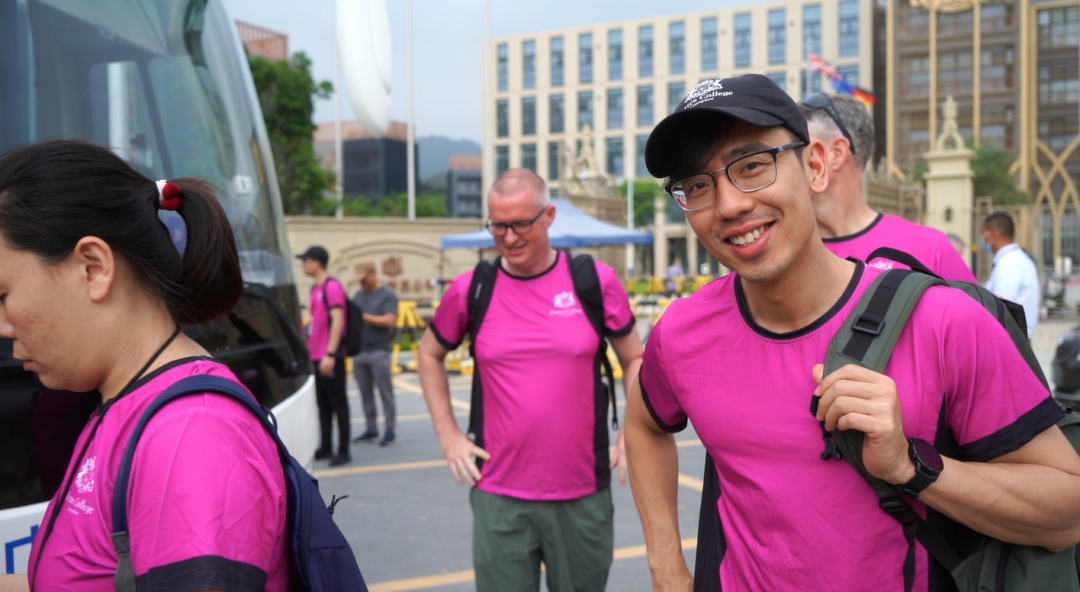 The activity team was responsible for designing activities and conducting risk assessment. Through collaborative planning, teachers in the activity team integrated the GRIT elements into six during-the-trip activities, so that mountaineering is not only a test of physical strength and willpower, but also an exercise of communication, organization, and leadership. 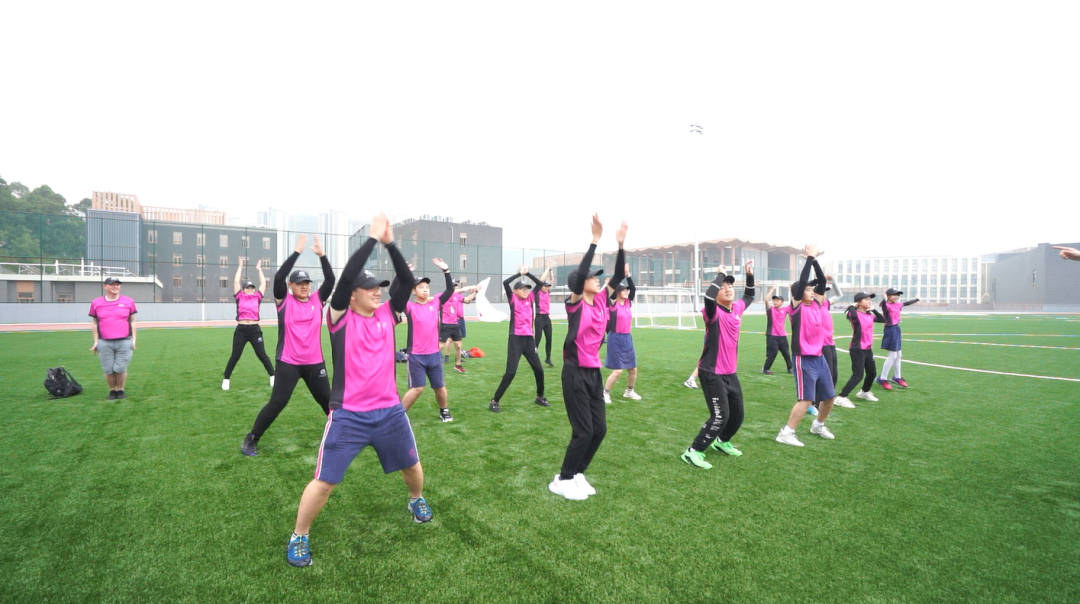 PE teachers used their lessons and weekend time to carry out mountaineering practice. From warm-up exercise to endurance training, from running with resistance umbrella to organizing climbing corridor, from training in formation to hiking of the mountains around the school. The training before mountaineering were carried out systematically, scientifically and orderly. 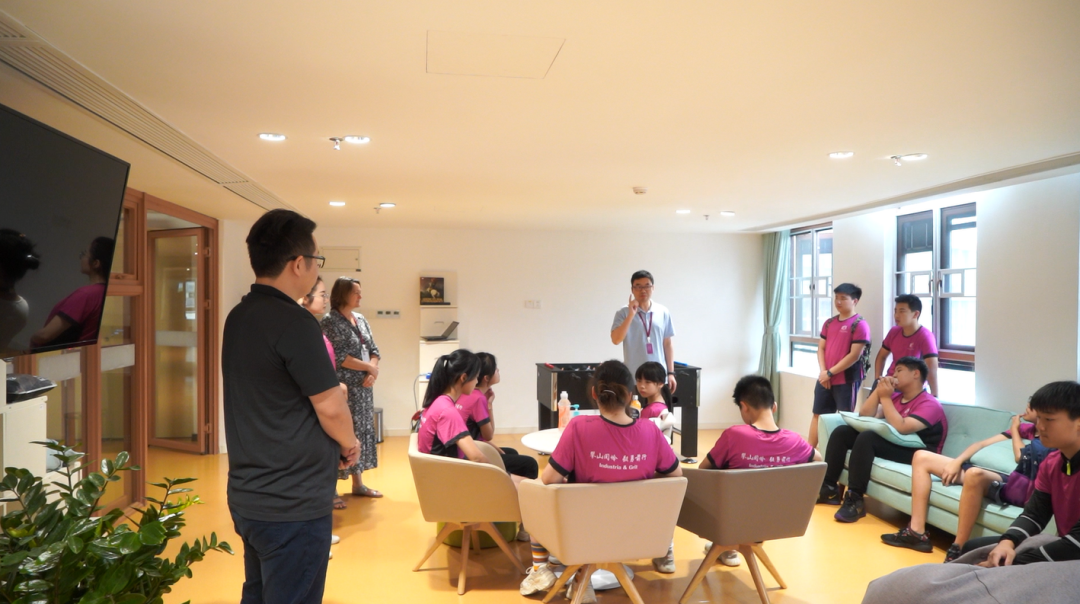 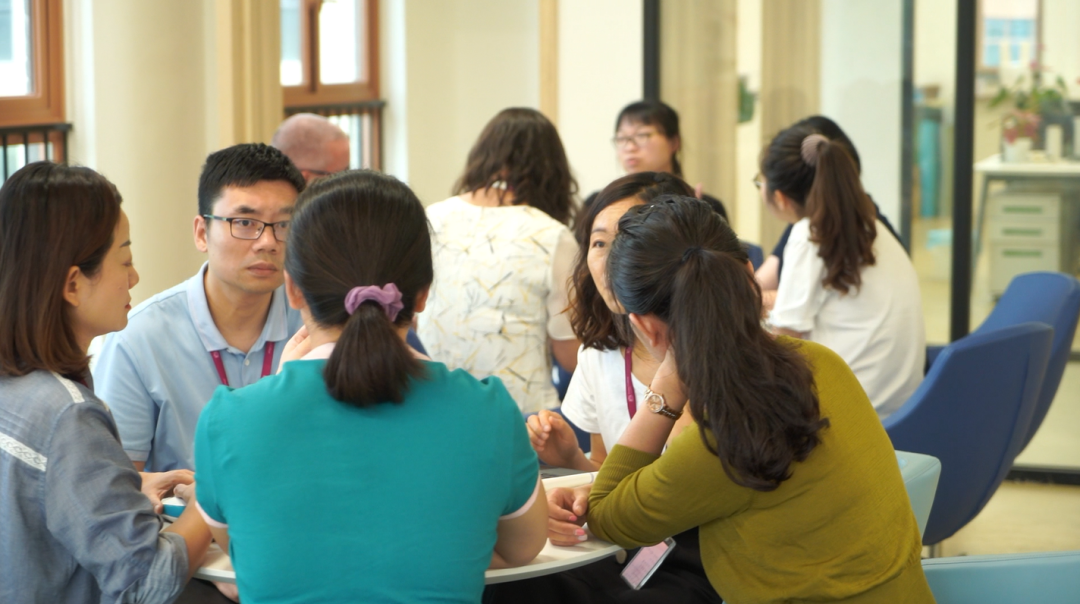 Through student gatherings, teachers' meetings, and parents' meetings, the significance, and objectives of the GRIT programme were publicized, and students, parents, and teachers are fully mobilized. At the same time, through the Student Handbook and Parents Handbook, pupils and parents gained a clear understanding of the curriculum and its related activities.

At 7:30 a.m. on May 8, all the teachers and students of Middle School gathered in front of the school gate. the Heads of Middle School, Mr. Lei Yu and Mr. Stephen deady, hosted the brief pre-departure ceremony. Mr. Marco Longmore and Mr. Nelson Chen delivered a speech respectively to mobilize students. When Jenny Guo, the Chairperson of the Student Union, took over the school flag from Mr. Marco Longmore and waved it vigorously, the morale of all teachers and students was surging and they were ready to start. 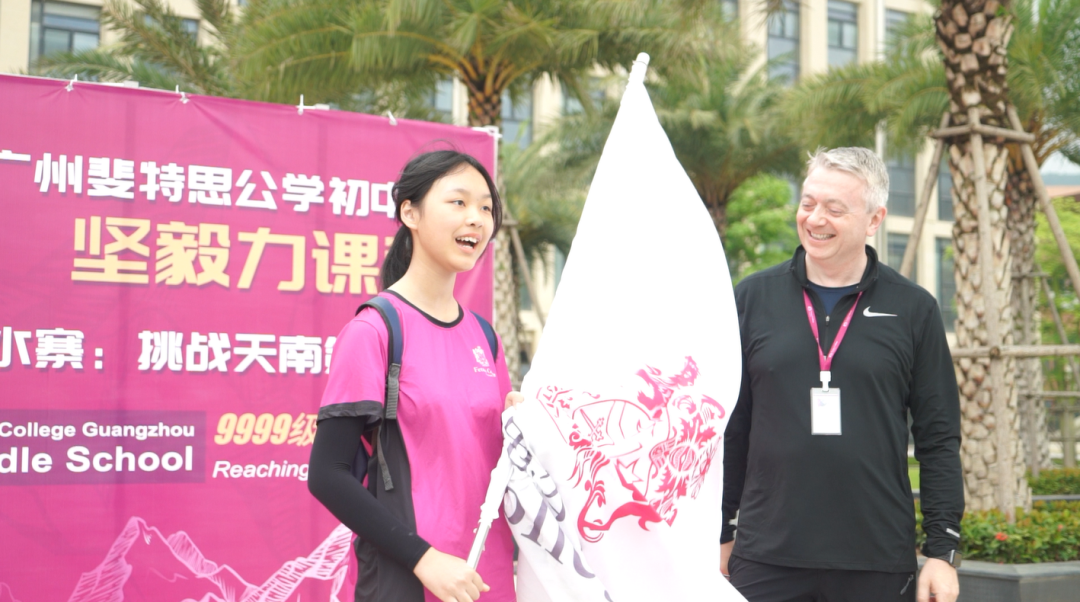 At 10 am, the mountaineering challenge began. In addition to completing the challenge of Baishui Village's 9,999-step climbing pathway, the pupils at the same time also need to complete six activities carefully designed by their teachers. Some of these activities focus on teamwork, some on subject knowledge, some focus on competition, and some on children-parents interaction. All the activities are closely linked with GRIT. 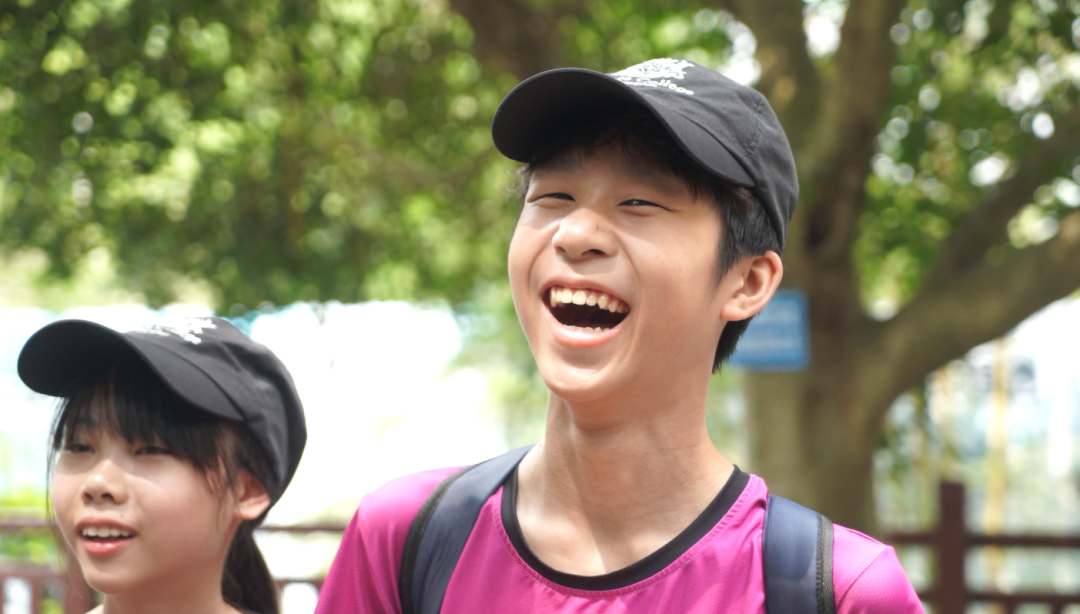 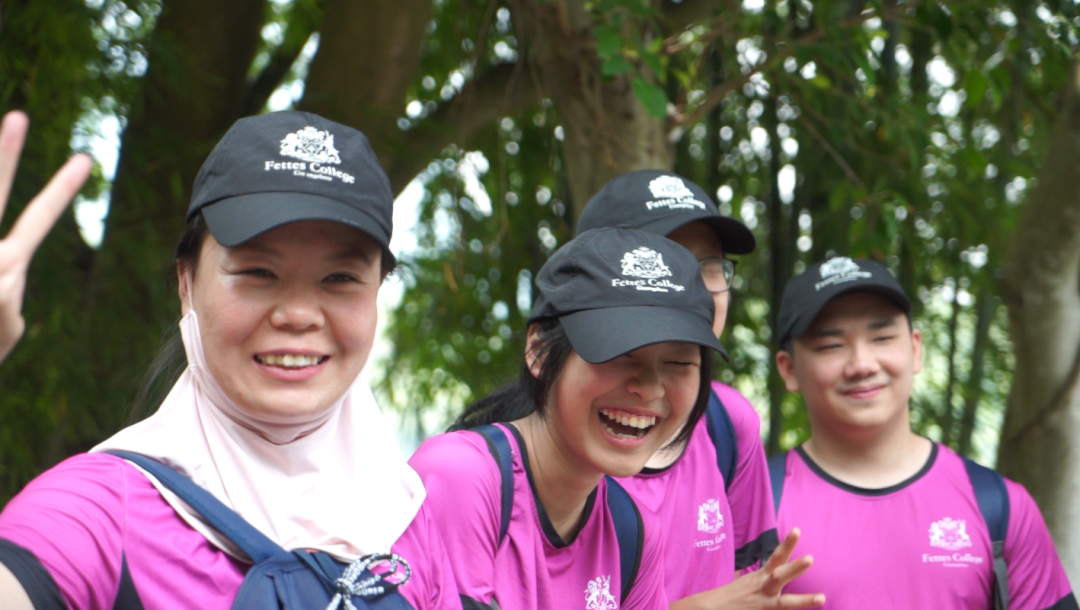 Taking the first activity "Water Carrying" as an example, it contains the cultivation of GRIT from four aspects.

In groups, each pupil was given a folding bucket, which was used to get water in the clear stream at the bottom of the mountain. Each group made its own water transportation plan through group discussion and their target was to transport the water to the designated place. In the end, the winning team will be determined by the water transport per capita in the team.

This task aims to practise the students' thinking skills as well as their communication and collaboration skills. Because there are differences in physical fitness and the number of members in different teams, how to maximize the per capita water transportation needs deep thinking and rapid decision-making. In each mountaineering group, there was no pre-set group leader, so that the children could take responsibilities according to their personal strengths in the process of completing the tasks, which offers each student a chance to sharpen its leadership. In addition, as the most important resource in the world, the utilization and protection of water is a global issue. In the process of transporting water, children are also imperceptibly involved in the thinking of this global issue. 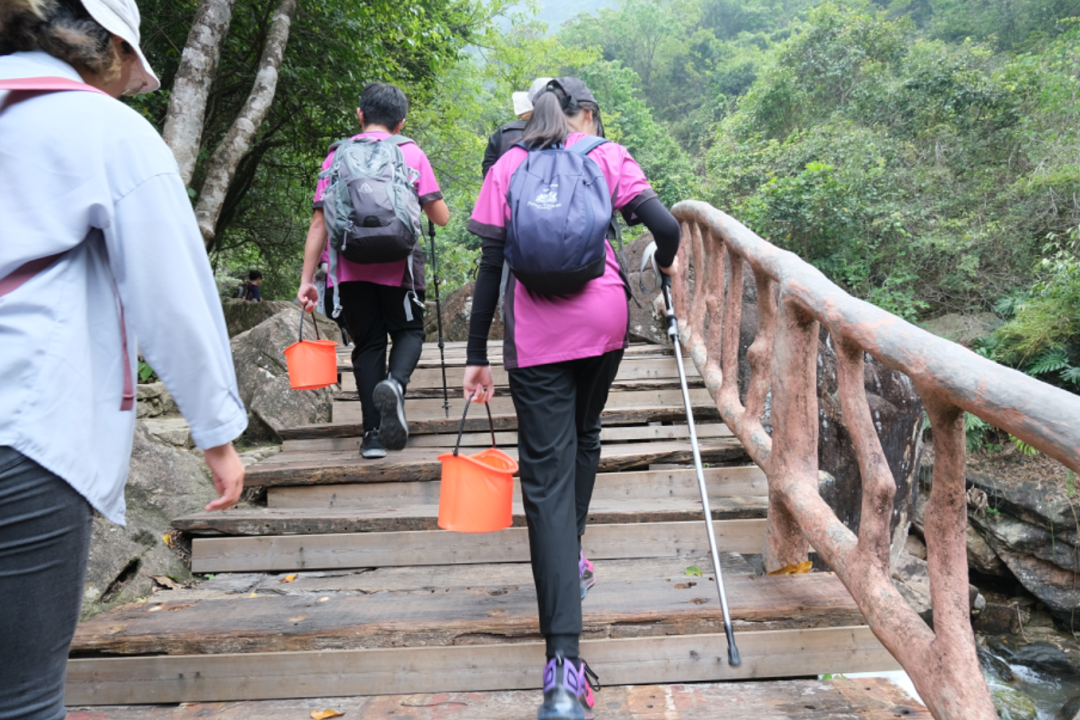 To Climb the steep stone pathway is not easy. And to ask students to carry a bucket of water whiling climbing makes the climbing more difficult. After the task card was sent to each student, they quickly worked out their own water transportation plan after discussion. In the process of mutual help, leadership can be exercised. One group encountered a problem: There is a small hole in the bottom of one folding bucket. What should they do? Their first thought was to replace the folding bucket, but the teacher’s reply was that there was no extra bucket. In the face of emergencies, they were not complaining, but actively thinking about countermeasures.

Finally, Bruce, a member of this group, volunteered to carry this leaky bucket. Bruce's solution is to cover the hole with one finger and hold the folding bucket filled with water in both hands. When he arrived at the destination, the water in Bruce's bucket was still full and almost no water was left out. The average volume of water in their group was not affected by this leaky bucket, so the challenge was very successful. 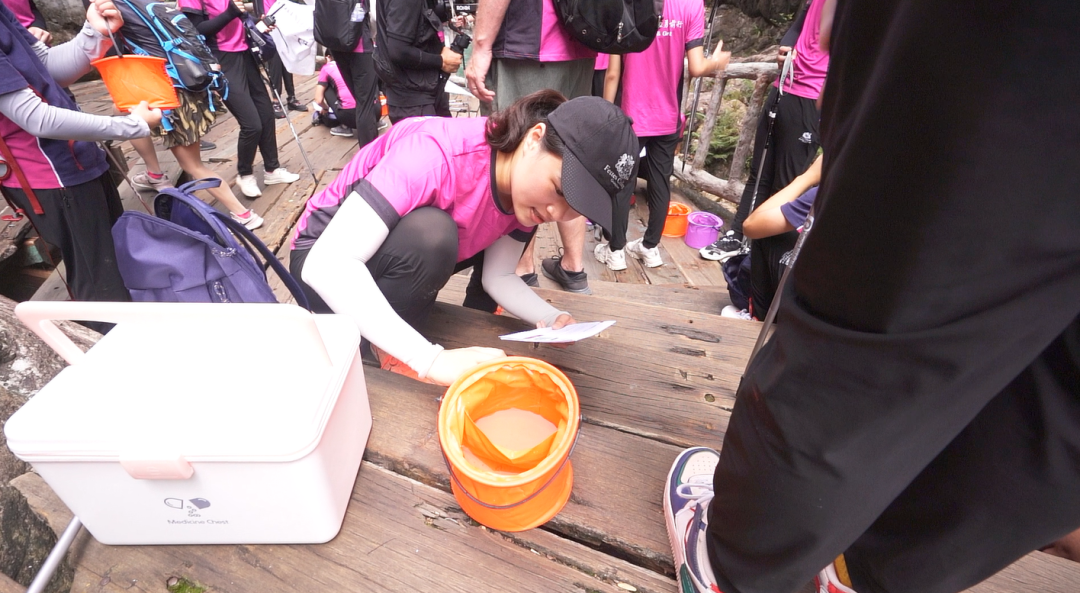 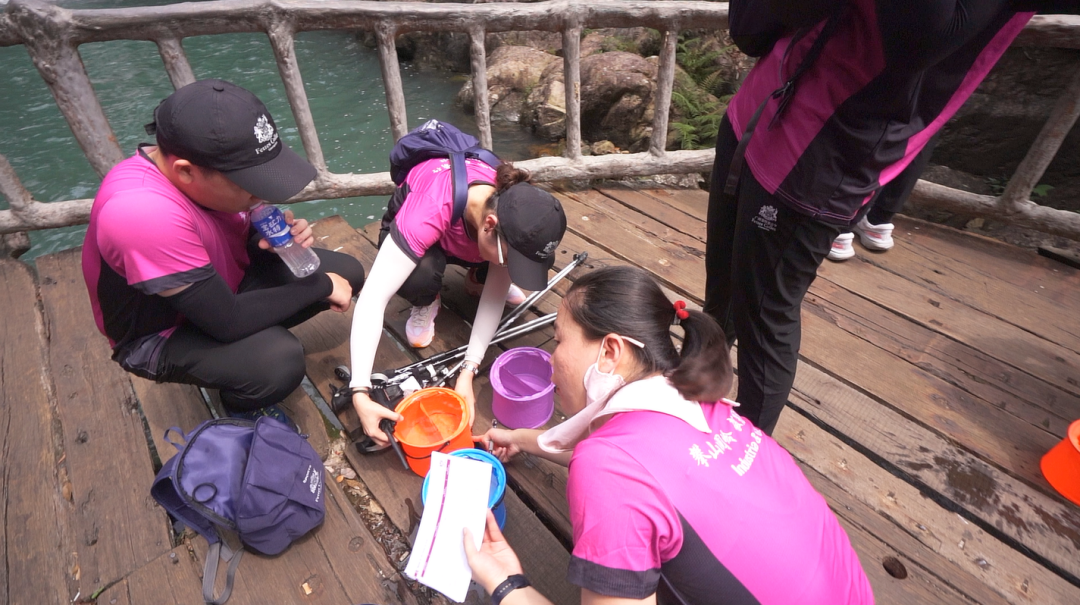 The second activity, “Little economists “, is closely related to the previous one. This task aims to help students become independent thinkers. Since the previous task "carrying water" stopped at a small store in the mountainside.Teachers designed the following questions: How much is a bottle of mineral water in the small store? Do you think the price is reasonable? Why?

*encourage students to interview the small store owner and other tourists;

*provide them opportunity to think independently;

*and offer them a real situation to consider questions in global contexts.

The water that can be seen everywhere usually does not attract too much attention of the students, but after experiencing the hardships of carrying water to the mountainside, it arouses the children to think about the economic value of water in the mountains. The subsequent activities, such as "ancient poetry competition", "treasure hunt", "team pose" and "meditation", are designed to help students apply subject knowledge to real life and to find a balance between individual and collective.

In addition to the design of six activities.
During the trip, we also set up two surprises:

After nearly three hours of climbing, the children came to the scheduled rest point: the 3699 steps. Lei Yu, the Head of Middle School Chinese, gathered everyone together. He took out a thick stack of envelopes from his backpack and distributed them to everyone. 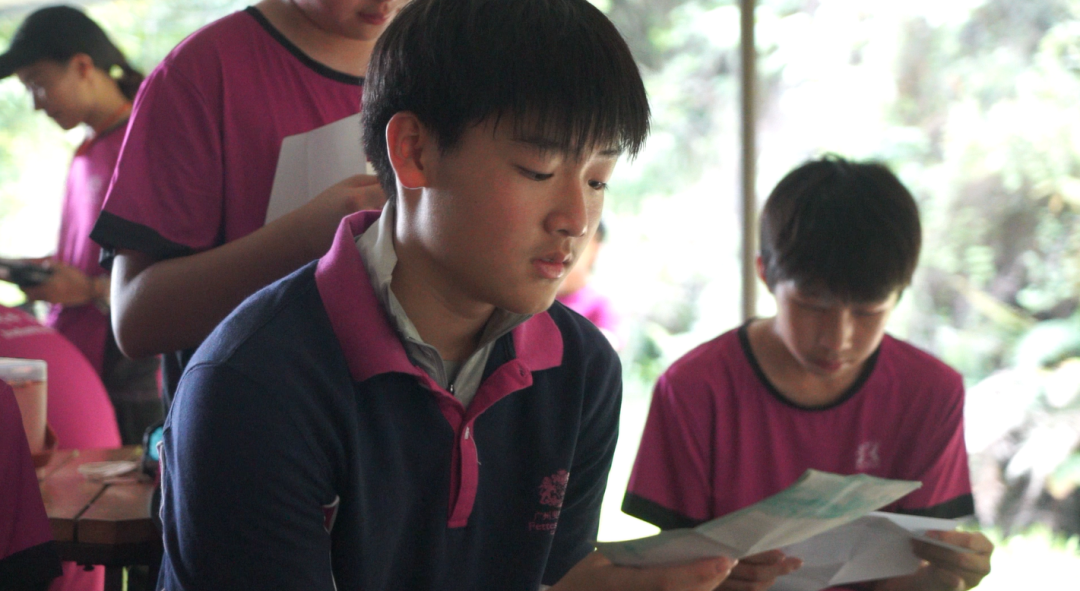 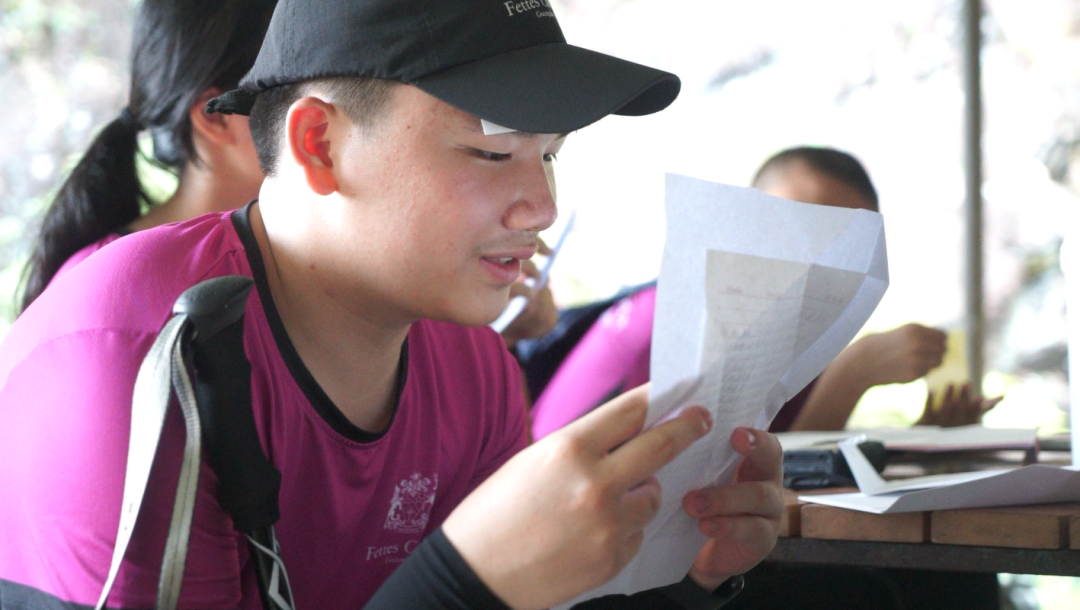 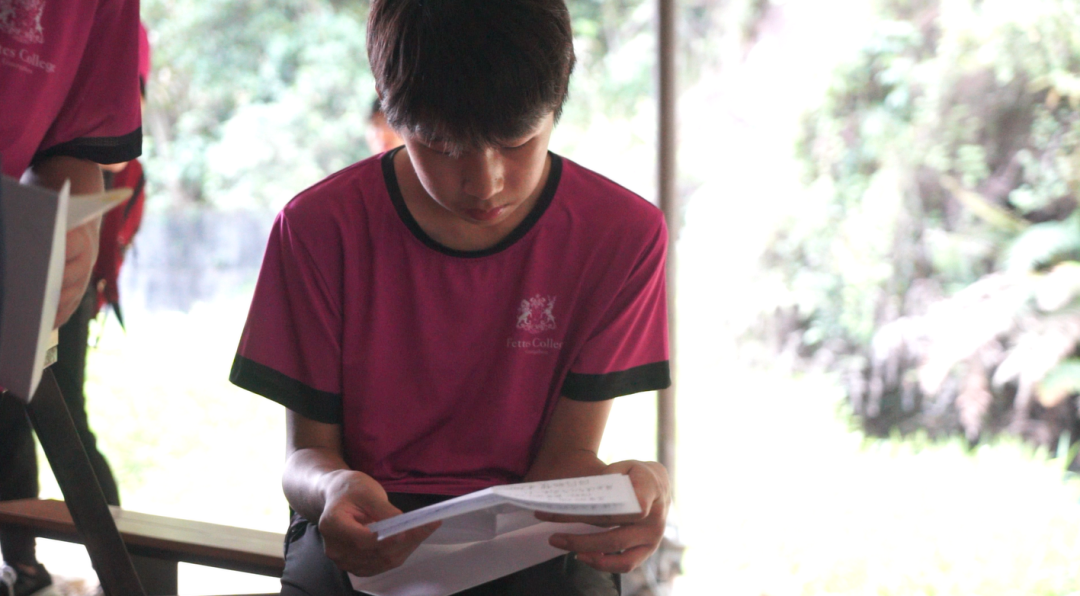 Around 1:00 p.m., after climbing more than three hours, students finally came to the 4099 steps where a viewing platform is located. They were welcomed by the teachers who arrived earlier. According to the plan, they will have a collective reflection and a lunch break here. But what they didn't know was that the school has prepared a bigger surprise for them here. Teachers asked the students to sit in a circle and to put on the blindfold for the collective reflection, and the parents who had already "ambushed" there came quietly behind the children. Under the instruction of the teacher, all the children leaned back and fell into the arms of their parents. Parents' surprise show-up and their hugs enhance the parent-child relationship. 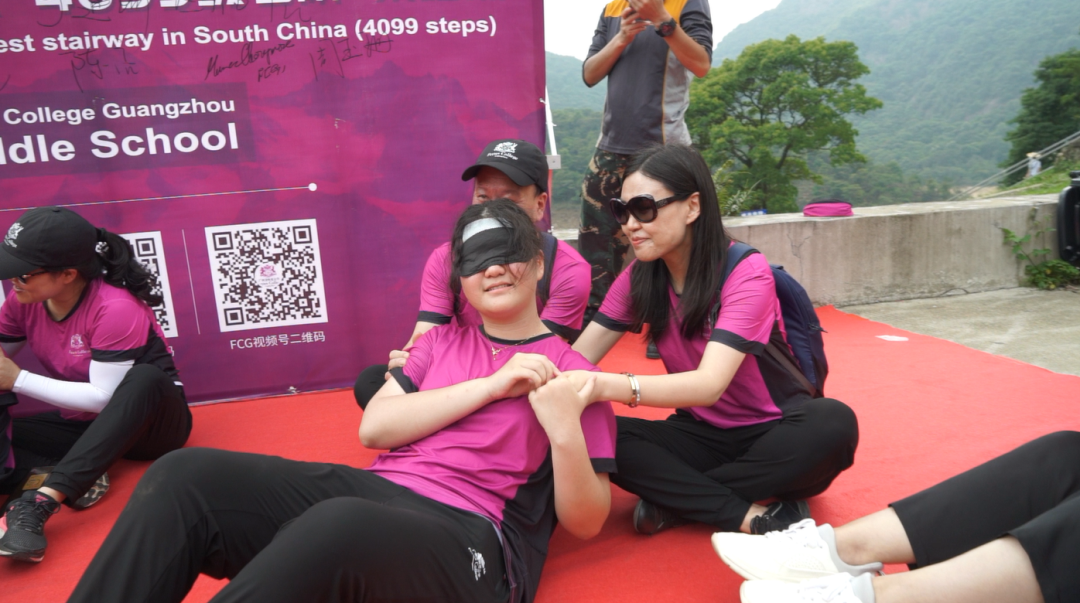 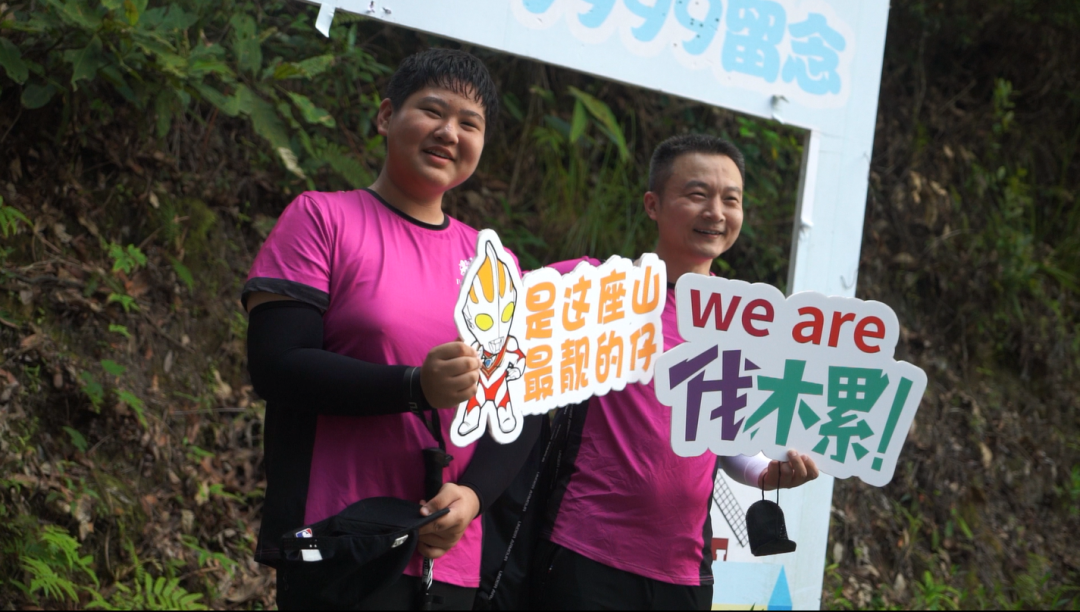 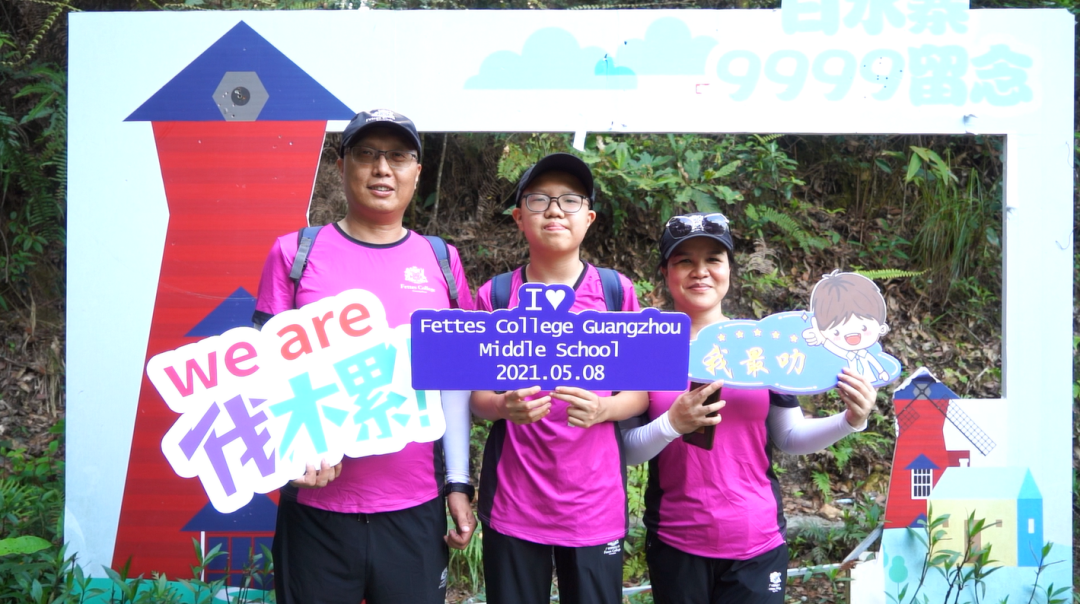 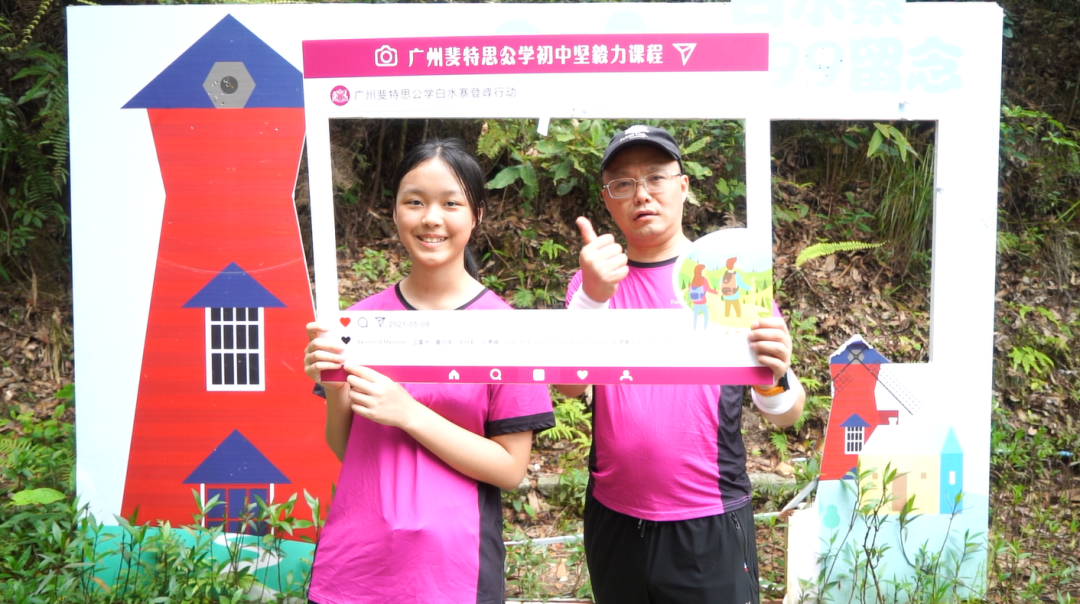 This successful challenge not only enhanced students’ self-confidence, but also provided an opportunity for parents to accompany and witness their children's growth. All the students completed the 9999 climbing stairway challenge. They exercised their willpower and demonstrated their resilience. They also understand that “nothing is hard in this world, if you dare to scale the heights.”

In order to consolidate the learning outcome of GRIT programme, Middle School teachers formed an assessment team to make a detailed plan for assessment. In the process of climbing, teachers evaluated the students' performance through five dimensions: endurance, perseverance, sense of safety, collaboration, and adaptability. Students also carry out self-assessment according to these criteria. In addition, the GRIT programme involves the assessment of subject-related content, which is assessed in class.

On May 21, Middle School students invited all teachers and parents to participate in the summative assessment of their GRIT programme.

This was presented in the form of a photo exhibition with the theme of GRIT. An exhibition is typically both a learning experience in itself and a means of evaluating academic progress and achievement.

The Photo Exhibition tells a story of learning that enables both creators and viewers to go deeper, rather than cover an entire project or unit. Exhibitions put students at the center stage as they describe the process and products of their learning. Like a sports event or performance, they bring families and community members together to celebrate the collective work of a class, a team, a school. But with exhibitions, the community is taking pride in students’ learning.